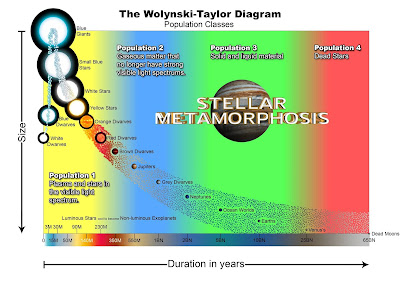 Just click on the graph to make it bigger. It is outlined the populations of stars according to their physical properties/stages of evolution. This is a huge correction as opposed to the incomplete and haphazard classification imposed by Baade in the 20th century, based on their locations.

It is not good to classify stars based on their locations in a galaxy. They needed to be classified by their physical properties and stages of evolution. Now we can do this because we have the data and observations to support it, which was never been made available in Baade's time. So to be fair, Baade simply did not know how star's evolved, he didn't know what they looked like, or how many were out there. He probably would have made something like this if he had the technology, but he didn't.
Posted by Jeffrey Wolynski at 12:12 PM No comments:


Posted by Jeffrey Wolynski at 12:06 PM No comments:


Posted by Jeffrey Wolynski at 9:46 AM No comments:

HAT-P-6 and HAT-P-6b in Stellar Metamorphosis, Hot Jupiters and Hosts

Posted by Jeffrey Wolynski at 11:23 PM No comments:

Last night I watched a show on Science Channel concerning the topic of Jupiter. I usually do not watch shows on Science Channel, because they tend to just gloss over issues and argue from authority for the ideas ALL the time, but one thing caught my attention. They had mentioned in one of the ads how they thought Jupiter was the Sun's secret twin. Now, in the development of this theory it is very clear Jupiter is an intermediate aged star, so that was interesting to note.

They also mentioned that Jupiter was more similar to a star than a planet. This was also very strange to me. I have never heard that mentioned on one of these programs before. They usually just repeat the dogma over and over about how they think it formed from some strange disk from the left over remains of the Sun's formation (which they did). The fact that they added that point in there, that Jupiter was more similar to a star made me really think about what's going on in academia. That's why I tuned in and began paying attention. Turns out that was the furthest extent of their program with regards to actual statements. The computer graphics told a different story.

They had the Sun as shining as a giant ball of yellow light, and had a quick clip which had another companion to the Sun as a smaller red ball of light (signifying a red dwarf). It was really strange. On one hand they constantly referred to Jupiter as a planet, then stated that it more resembled a star because of the size, huge magnetic field, radio emissions, and huge amounts of hydrogen. Then they showed a CGI clip of two objects orbiting each other that clearly insinuates that the Sun and Jupiter were a hotter yellow star/red dwarf pair at one point. This is perfectly reasonable in stellar metamorphosis theory. As it would explain why Io, the closest object to Jupiter, has such a tortured surface that has yet to settle out and cool. It was orbiting Jupiter when it was also a red dwarf, but Jupiter has cooled down enough to have stopped ripping away at Io.

My guess is that Io was much larger when it started orbiting Jupiter and it had its thick atmosphere ripped away as Jupiter was in red dwarf stages, so it did not have enough time to layer more volatile materials and form an atmosphere suitable for life, with water oceans. It has a more tortured past than Earth. Now all of this has to keep in line with stellar metamorphosis, the purity and size of the iron core will tell a lot of information on Io. If it is mixed in with sulfides, or if it is even present at all will give us huge amounts of information concerning its past history. It is like a geology that actually goes into the object, not like the geology of our times which is only concerned with the surface features (material at most 100 miles beneath the surface).

The star is a 3D structure though, I hope geologists can move on past their surface feature only mentality to see the big picture. That being said... I did not see any chemists on the program either. Interesting to see.
Posted by Jeffrey Wolynski at 5:17 AM No comments:

Feeling Better, I should continue writing and working on Stellar Metamorphosis Now

Title says it all.

Posted by Jeffrey Wolynski at 5:02 AM No comments: