The Origin of the Moon in Stellar Metamorphosis

A lot of steps and ideas are neglected in this paper, it is just a main priority paper to solidify that the Moon and the Earth are a captured system, but much richer in past history than what is assumed by the dogma. (They assume Earth was always solid/liquid material, even though it was really much more gaseous and even plasmatic deep in its past history as a hotter younger star).

Do not take my word for it, it is right on wikipedia, Earth being basically rock and lava:

Here is the paper:

Posted by Jeffrey Wolynski at 9:11 AM No comments:

Lets start with the basics.
The great dichotomy of the Solar System: Small terrestrial embryos and massive giant planet cores

Below is the abstract.

[I]The basic structure of the Solar System is set by the presence of low-mass terrestrial planets in its inner part and giant planets in its outer part. This is the result of the formation of a system of multiple embryos with approximately the mass of Mars in the inner disk and of a few multi-Earth-mass cores in the outer disk, within the lifetime of the gaseous component of the protoplanetary disk. What was the origin of this dichotomy in the mass distribution of embryos/cores? We show in this paper that the classic processes of runaway and oligarchic growth from a disk of planetesimals cannot explain this dichotomy, even if the original surface density of solids increased at the snowline. Instead, the accretion of drifting pebbles by embryos and cores can explain the dichotomy.[/I]

1. "The basic structure of the solar system."

This right off the bat means they consider the solar system as a singular "structure". What structure have you ever seen that has billions of kilometers  of vacuum separating the objects? That is absolutely ridiculous! That is like saying you have a bridge, yet there is nothing connecting the islands but a small path off each island and a wide expanse of water in between the islands. The solar system is NOT a singular structure, it is comprised of thousands of individual structures. The objects are completely independent of each other. It is the mindset from the very beginning that ruins their ability to view the solar "system" as it really is. These objects are independent of each other. The only concept that connects them is the fact that they are in orbit around the Sun. Not only that, but most objects in the solar system DO NOT EVEN ORBIT THE SUN!

Outer and inner are completely relative. The vast majority of "exoplanets" found would be considered "inner", meaning ALL the hot Jupiters and hot Neptunes, etc., so any model that chooses to stress their distance from the host is ill-suited, and again, based on the assumption that the solar system is representative of anything. With that, it can also follow that they still assume that figuring out the solar system's patterns will lead to understanding exoplanets. So essentially they are basing this entire paper on HABIT alone. With that said, it is predictable how NOTHING in the paper mentions exoplanets. These scientists are still talking about the Solar system still as if it is all we have observed. They have gone stale. This paper was written in 2015!!!

3. "What was the origin of this dichotomy in the mass distribution of embryos/cores?"

They are asking a question they cannot answer. They even say they can't answer it, yet in very strange wording:

"A more quantitative modeling of planet accretion accounting for disk’s evolution remains to be done and is left for a future work."


You know why they just brush it off for future work? Because they can't do it! They have no mechanism to clump material together. The "pebble" argument is bogus! Yet it is mentioned dozens of times.
Posted by Jeffrey Wolynski at 7:46 PM No comments:

Neptune is a Star, Neptunes are not Rare, Stellar Metamorphosis 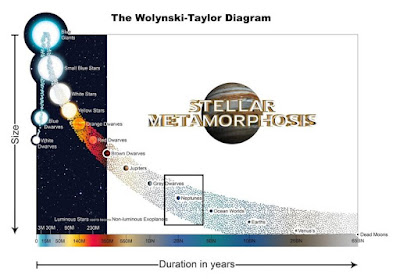 As the reader can see, Neptune sized objects are going to be very common, as opposed to establishment dogma which predicted that they are rare. They are not rare, they are common in stellar metamorphosis theory because they are intermediate aged stars.

Here is the paper.