A New Paper by Daniel Archer on White Dwarf Crystallization

I will review this in a youtube video today and add some thoughts.
Posted by Jeffrey Wolynski at 6:59 AM No comments:

Two new papers by Ivo Van Der Rijt which I will discuss in another presentation on youtube soon.

Disproof of the Accretion Model


Posted by Jeffrey Wolynski at 7:51 PM No comments:

The Ouroboros of GTSM by Daniel Archer 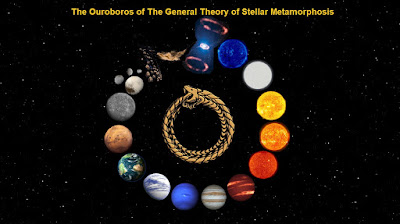 I didn't know what an ouroboros was, but apparently it is a symbol for eternity. It is a dragon eating its own tail. Stars "eat" dead ones. Pretty cool stuff. You learn something new every day. Though, for some reason I remember seeing that symbol in middle school when I was about 12-13 years old.

The first known Ouroboros was in the Enigmatic Book of the Netherworld, the ancient Egyptian funerary text of King Tutankhamun. Pretty old stuff, about 14th century B.C., at least in human terms.

The text concerns the actions of the god Ra and his union with Osiris in the underworld. In an illustration from this text, two serpents, holding their tails in their mouths, coil around the head, neck, and feet of an enormous god, who may represent the unified Ra-Osiris. Both serpents are manifestations of the deity Mehen, who in other funerary texts protects Ra in his underworld journey. The whole divine figure represents the beginning and the end of time.

Posted by Jeffrey Wolynski at 9:13 AM No comments:

Count of Objects in the Milky Way Galaxy by Visibility 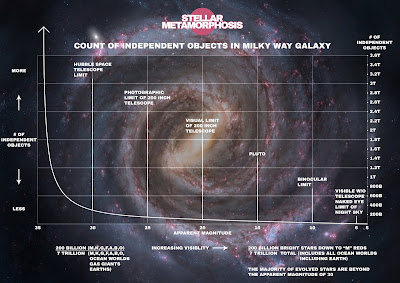 Diagram by Baz Taylor and I.

There will be more work to do.
Posted by Jeffrey Wolynski at 8:45 AM No comments: