A4 of Stellar Metamorphosis Graph 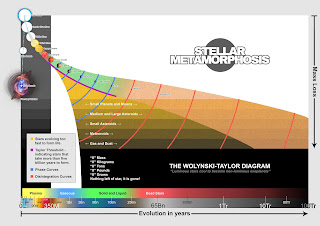 Posted by Jeffrey Wolynski at 5:37 PM No comments:

Some calculations are done to hypothesize what the minimum volume of a star is needed to begin the formation of life. This paper builds on the previous volume principle of life formation. To form life, vast volumes of material is needed to increase the statistical likelihood of molecules mixing in ways that resemble complex proteins, sugars, and long chain hydrocarbons which branch such as phospholipids. This is of course far before any feedback and self-regulating mechanisms spring up, this is just to address the simple act of mixing elements and combining/recombining them in large scales. There is to date no other theory that connects young stars directly to the formation of life, this paper's goal is to help alleviate this vacuum, and places reasoning to the last universal common ancestor issue raised by academics and researchers.
Posted by Jeffrey Wolynski at 7:34 AM No comments:

Taking a Step or Two Back from Development of Stellar Metamorphosis

It feels good to just let my brain wander and recoup from almost 8 years of intense thinking. I have learned so many lessons about how to do theory development, and sharing it with a rather large audience.

Those lessons take time to process, they are not instant lessons. They are lessons of maturity and of honing thoughts and ideas.

In short, taking a step back doesn't mean I'm not working on the theory. It is the opposite. I am processing ideas and organizing where I am headed next. A sabbatical, I guess that's what its called. A break, but not a break.

I have about 8 folders of notes and papers to sort and organize. I feel though that chewing on the idea slowly is the best route to take now. Long gone is the urgency. I realized this because I got a comment on one of my youtube videos concerning the theory, and the youtuber said that this theory was a much better explanation offered by either of their Astronomy 101 and 202 courses.

I thought that statement alone to be tremendous. They took both levels of astronomy, just to see this theory and say, "this is a better explanation". That has never happened before, an acknowledgment like that. Its better than the constant ridicule.
Posted by Jeffrey Wolynski at 12:31 PM No comments:

Every brown dwarf has at least 4 large orbiting objects.

So astronomers should think about this, they should think about how brown dwarfs are explained away as being young stars (they're not). They are stars in middle stages of evolution, all at least 263 million years old. They have had lots of time to adopt older, Earth sized objects and small moons.
Posted by Jeffrey Wolynski at 12:17 PM No comments:

I think its wonderful that we can really look at Mercury with new eyes. It is not the left over material from the Sun being born, it has nothing to do with the Sun at all! It is a completely independent object. It orbits the Sun now, doesn't mean it was always orbiting it. Hardly. It orbited hundreds of different objects in its history. Hundreds.

Mercury is a fossil of a star, old beyond comprehension.


Posted by Jeffrey Wolynski at 6:47 AM No comments: