Posted by Jeffrey Wolynski at 8:53 AM No comments:

Posted by Jeffrey Wolynski at 11:18 AM No comments:

Here is a paper showing wikipedia stats which signals to me, astronomers are lost.

Posted by Jeffrey Wolynski at 7:39 AM No comments:

The beginning graph for plotting a star's age against its total angular momentum. I have a lot more work to do to work out the details, just getting the beginning portion, the connection from hotter, younger star to older dead star is the first step. Just click on the image to make it bigger.

For scale, the total axial angular momentum needs to be multiplied by 1 * 10^30.

The age in years is the x-axis. Starting at ~1 million years old.

The youngest stars, stars that are younger than 1 million years, I have much more work to do on. White dwarfs and pulsars are the name of the game with those. Plus, something about red dwarfs that could be on the left hand side of the WT diagram. That was a wild thought. 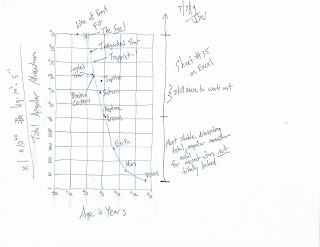 Posted by Jeffrey Wolynski at 5:10 PM No comments: