I was thinking. When that TESS data comes back its game over for the dogma. The nebular hypothesis is already dead, which is really cool. I can tell because of the statistics on the wikipedia pages. Check it out:

Just click on it to make it bigger. Clearly there is a huge uptick in views on the history of the nebular disk theory. They're trying to figure out where they went wrong in other words. I suggest they go back to the Greeks when they invented the term planet as opposed to star. They were the same objects evolutionary speaking...yet they were characterized as mutually exclusive, which continues to thwart the minds of the highest I.Q. people on the Earth.

Do not take my word for it. There's a drop in the other direction, this is the nebular hypothesis results. 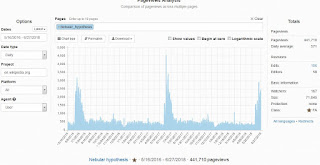 It dropped. Significantly. They are abandoning ship. Watch out for the propeller yall!

Posted by Jeffrey Wolynski at 8:42 AM